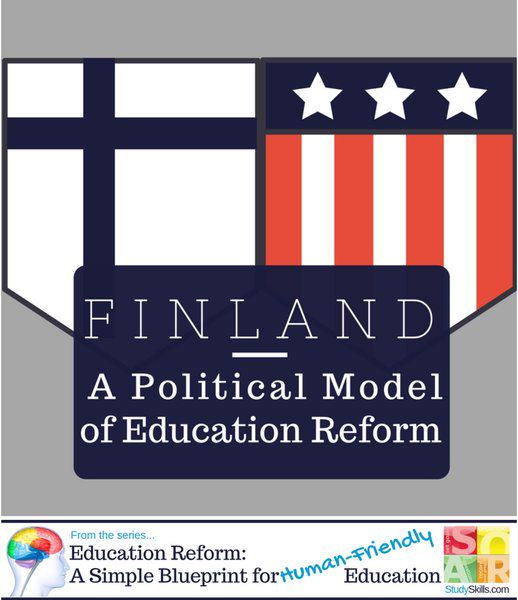 More than 30 years ago, Finland made dramatic changes to the political infrastructure of their school system. A generation later, they emerged at the top of the world in international assessments for managing “real-world” situations. They are one of the leading political models to investigate.

Finland has created a system that nurtures problem-solving and critical thinking skills. They have developed classrooms where teachers rarely lecture for full class periods, but instead, allows students to determine their own weekly goals and chose the tasks they will work on… at their own pace.

They have accomplished all of this in an extremely diverse society; nearly 50 percent of the student population does not speak the native language as their mother tongue.

What Is Finland Doing?

The following are highlights I took from Linda Darling-Hammond’s article, Steady Work: How Finland Is Building a Strong Teaching and Learning System:1

They decentralized education and put control at the local level. “Over the past 40 years, Finland has shifted from a highly centralized system emphasizing external testing to a more localized system in which highly trained teachers design curriculum around the very lean national standards.” Reducing national administration empowers the community, local administration, and individual teachers to meet the needs of their students as they see fit; they are not required to adhere to rigid standards that are ignorant of complete human education.

They place high levels of trust in their educators. Teachers are free to make autonomous decisions. This trust is facilitated by several factors: The process to become a teacher in Finland is limited and highly selective. Once a candidate meets the strict criteria, they are provided intensive training and collaboratively coached in the classroom. Certified teachers in the classroom are provided time for peer collaboration each day to facilitate: cross-curricular connections, creative instructional ideas, and problem-solving. This frees teachers up to meet the needs of their students as they best see fit.

They have only ONE standardized test, from K-12: “Finland maintains one exam prior to attending university: the matriculation exam… Although it is not required for graduation or entry into a university, it is common practice for students to take this set of four open-ended exams that emphasize problem-solving, analysis, and writing.” Employers here in the United States would salivate over students who have been trained and encouraged to develop problem-solving and analytical skills!

They reduced heavy content standards. Previous curriculum documents exceeded 700 pages. Today, their math curriculum is less than ten pages. The U.S. has just accomplished by adopting the Common Core, but we are still fumbling wildly with appropriate implementation.

They educate to meet the needs of their economy. Finland schools provide a two-track high school system: one for college-prep, one for training in the trades. Both are equally valued in the society. This creates a win-win situation for students, who are free to choose the track that best suits their interests and aptitudes. And, it’s a win for their economy because they have highly-trained graduates to meet workforce demands.

One potential area of discrepancy, however, is that Finnish students do not start school until age seven. Maria Montessori and neuroscience indicate that’s four years too late! Brain development at the age of three is ripe for learning beginning literacy, mathematics, and social skills.

No Need to Reinvent the Wheel

Any civic and political leaders who are serious about reforming education politics should visit Finland.  From them, we can learn how to organize our political and funding structure for success!  If that’s not a viable option, check out the additional resources about Finland’s education system below.

There is a wonderful, 60-minute documentary called The Finland Phenomenon. Click here to see a preview of it.

Here’s another short film about Finland, from Collective Evolution:

Some educators are concerned that the most recent PISA scores of 2015 indicate Finland has slipped from its top position in the world. Some speculation is that other countries are aligning their instructional system to match PISA (which Finland does not do). Others speculate that dramatic budget cuts and high levels of recent immigration are eroding performance levels.2

The latest rankings do not change the fact that Finland made significant changes… and saw significant results. We can study what changes led to their top success and what changes since may have impacted their slight decline. Finland remains an important case-study to evaluate as our country considers effective ways to improve education policy.

To make the greatest impact in education reform, it’s best to start from the top. And, there’s no better example of what to do and how to do it than Finland! We have no excuse; the solution has been established and tested. We simply need to put it into action!

The United States has already made one step in the right direction to follow Finland’s lead. Believe it or not, the Common Core –in theory– is a beautiful stroke in the right direction. However, it’s been mutilated by a cascade of miserable misconceptions and horrible implementation. Find out Why Common Core Is the Worst and BEST Thing to Happen to Education in my next article.