The Brain Biology of ADHD & Autism 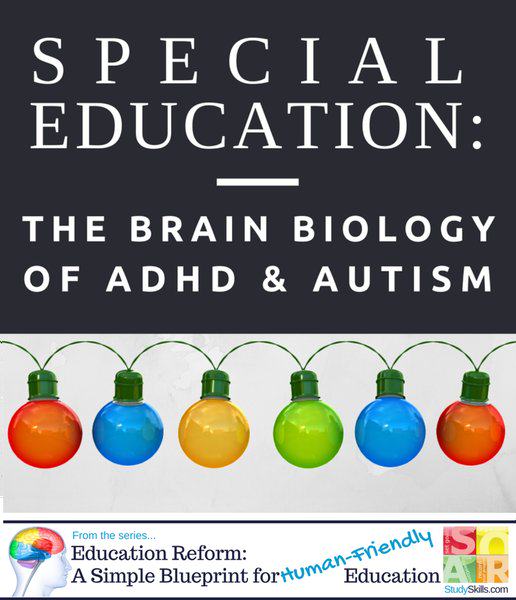 Welcome to part 3 of our 3-part series on special education. In part 1, we explored the brain biology of learning disabilities. In part II, we explored How to Solve and Prevent Learning Disabilities.

The brain runs on electricity, just like your refrigerator.  People who’ve experienced “brown-outs” know what happens when there is not enough electricity; their lights, refrigerators, and all other electrical appliances go out sporadically.

The same thing happens in an ADHD and autistic brain; a low power supply in the brain means sections of the brain go out sporadically. The brain gets its power from chemicals, such as: serotonin, dopamine, adrenaline, etc.  But, some brains simply can’t produce enough brain chemicals. Or, they may struggle to regulate brain chemicals and maintain “normal” levels of connections.  The result is ADHD or autism.

ADHD is caused by a low power-supply in just one region of the brain, the Front Brain.

“Executive function” (EF)is a common challenge for people with autism. EF is managed by the Front Brain. So, if someone with autism has EF challenges, the problem is happening in the same region of the brain that causes ADHD.

Both ADHD & autism share the same biological patterns as learning disabilities. Therefore, solutions for managing these conditions remain consistent with recommendations in the previous article, How to Solve and Prevent Learning Disabilities.

So far, in the series on education reform, we’ve explored the core problems of education in the United States, a simple model for effective learning, and how that model helps us resolve our top problems. We’ve also discussed how this model relates to special education.

Next, it’s time to explore Ideal Instructional Models, schools and programs that are successfully implementing the best-practices of Complete Human Education.