Our Hands Are an Extension of Our Brain

My Last Visit with Aunt Esther: A Powerful Story About Our Hands Powering the Brain… and the Heart

Aunt Esther is 94 years old. She’s my dad’s mom’s sister. (Follow that?) Grandma died just before I turned 16. (Perhaps you recall the real-life Halloween Tale of Grandma’s Eternal Departure.) Ever since, Aunt Esther has been a surrogate grandmother.

There’s a 12-hour drive between us. She lives in Dad’s hometown of Eau Claire, WI. I live in Detroit. After Grandma’s passing, Aunt Esther invited me to stay with her when I was in town.

Those visits were like stepping into a time-warp, right back to my childhood. Her home smelled like Grandma. It was filled with all of the same Norwegian knickknacks. She sounded like Grandma and had similar mannerisms. And, it was clear she enjoyed those visits every bit as much as I did.

Meanwhile, Aunt Esther religiously called each of us on our birthdays. She stood in a specific spot in her home that “had the best echo” and would sing as off-key as she possibly could!

Imagine an itty-bitty Norwegian lady singing high-pitched and off-key… with an echo. It was hilarious! The whole family rushed the phone when Aunt Esther showed up on caller ID. We laughed like crazy! Couldn’t ask for a better birthday gift.

(I recorded one of her last calls and made it the ringer on my phone. You should see the looks I get when my phone rings in the library-quiet waiting room of the orthodontist!)

I managed to see Aunt Esther this past summer. Probably for the last time. When visiting last year, I noticed some memory loss. Figured it would be the last time she would recognize us. Sadly, I was right.

But, I prepared for the inevitable by taking these selfies last year. (Two different “selfies” on two different visits during last summer’s trip.) Finally got around to having them printed and framed for Valentine’s Day. Sent a hinged frame, along with lotion and lip gloss that smell like her favorite scent (angel food cake).

Left: “Four-generation selfie” with Aunt Esther, my mom, me, and my daughter.
Right: When my brother, Dan, arrived in town, we zipped over to see Aunt Esther together. She was fascinated that we could take the picture and see it instantly on our phone!

This year, Esther was confused. My first visit to see her was with my youngest brother, Greg (not pictured), and each of our daughters.  She couldn’t place who we were. She thought we were married because we walked in together with two girls.

We explained we were siblings, “Ray’s kids.”

But, How Do You Converse with Someone Who Doesn’t Really Remember Who You Are?

It just so happens… In the last year, we’ve reinvented every system within our business –and even our home– by making everything as “hands-on” and interactive as possible. The transformations have been incredible! On so many levels. These changes were inspired by a visit to Menlo Innovations in Ann Arbor last year. But really, that visit sprung me back to my Montessori roots.

Maria Montessori always believed that the hands were an extension of the brain. Modern science has now confirmed that the brain and skin develop from one singular cell, together. I had never thought of applying Montessori principles to how we run our business (or to getting the kids out of the house on time without yelling, or nagging, or spending a full day’s energy before 8:30 AM). But now, it’s so painfully obvious… in hindsight!

So, in an instant, I realized our conversation needed to be “hands-on.” I started with her jewelry.

Aunt Esther has always loved jewelry and fashion. She hasn’t left her assisted living home in months, but she was wearing a set of earrings, a necklace, and several rings. She was able to tell us the story behind every piece of jewelry.

Then, we moved on to my purse. It’s a bright tangerine color. Made out of seatbelts. She loved it! Kept running her hands over it to feel it’s smooth texture. Then she asked if she could open it and explored the design inside. For a moment, it was like “girl talk” with a girlfriend.

We then spent the rest of the time looking at maps of Norway on the iPad, as she loved doing last year. She could still recall the names of the cities where her parents were born and enjoyed “playing” with the map.

As we left, the girls gave her a hug. She soaked it up! 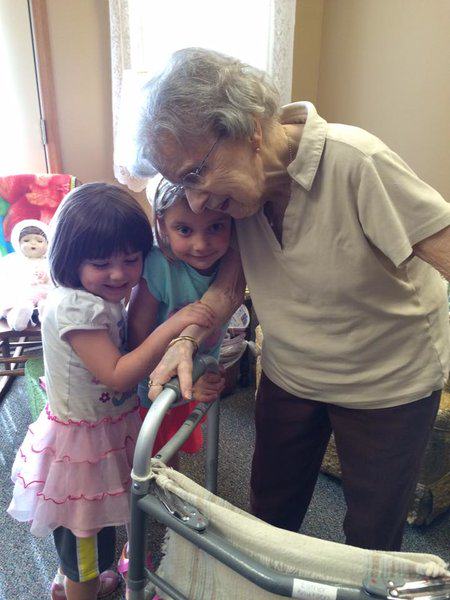 My niece and daughter eagerly shared a hug with Aunt Esther. She replied, “Oh, girls, I love you so!”

The next day, I visited Esther again. Just me. The rest of my family drove back to Detroit while I drove to Minneapolis for a meeting. Stopped at Esther’s place on my way out of town. Kinda figuring it would be my last visit with her.

It was only 16 hours since my previous visit, but she did not recognize me. My only hope was the selfies (pictured above) sitting in a frame on her table. They didn’t help the day before, but it’s all I had.

I brought the hinged frames to her. She laid them across her lap. She pointed to each person as I named them and explained who they were. She kept coming back to the picture of her.

“That’s me…” she would say, as she tried to connect to the rest of us. Finally, she pointed to my mom. “Oh! I recognize her! And she’s your mom?… And that’s you, and that’s your daughter? OH! I understand now!”

Her voice changed from confusion to tender kindness. “Thank you for explaining this to me. Thank you. That was so kind of you. And thank you for doing this,” as she ran her hands over the frames, presumably meaning “thank you for sending these pictures to me.”

She then started asking about the angels on the other side of the room. She was actually referring to a couple of figurines on a shelf, but I couldn’t help but wonder.

I brought the angel figurines to her. She ran her hands over each one and told me where she got them. She then asked me to grab a carving of the Holy Family that she keeps next to her TV. She ran her hands up and down that carving and hugged it. “I thought this one was so beautiful, I couldn’t put it away after Christmas. I love to look at it.”

From there, I began pulling more knickknacks off the shelf, one-by-one. (Did I mention she’s got a bazillion Norwegian knickknacks?!) It was so powerful to watch her run her hands so carefully over each one. She was definitely relying on her sense of touch to explore each object.

Each object had a story connected to it; she could recall each one clearly. One of them had a rosemaling design. So, I pulled up pictures on my phone of Anna’s dress from Frozen; explained that Disney had just made rosemaling popular all over the world. She was thrilled to learn that! (She’s a fashion diva, I tell ya!) 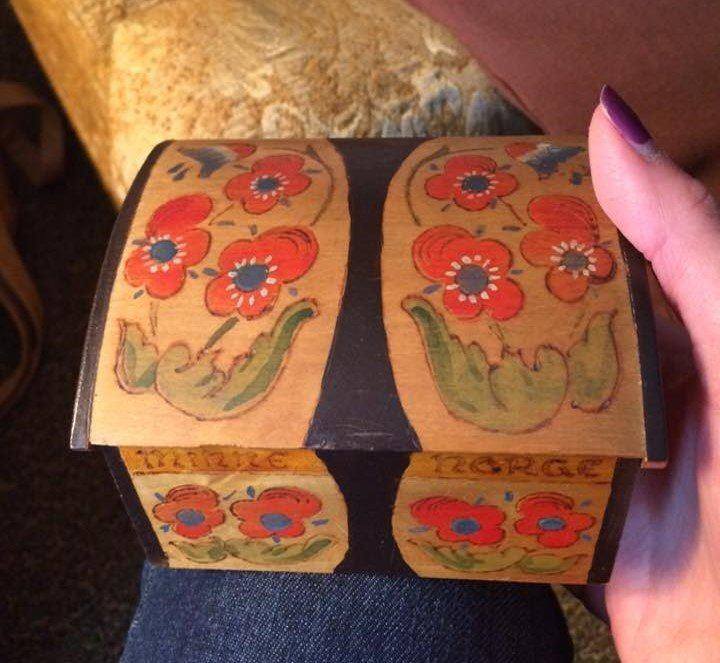 The “Norwegian knickknack” with rosemaling; a design made popular by the epic movie, “Frozen.”

We spent over 90 minutes with the knickknacks, one at a time. I think we both wished it could go on all day, but she was getting tired and short of breath. It was soon time for me to go and for her to eat lunch. I walked her down to the cafeteria.

She kept saying, “Gosh, it was good to see you. Thank you for coming to visit me!” over and over again. I was already dreading the moment I would have to leave. In the cafe, I helped her into her seat. Once she was settled, I leaned in to give her a hug and say “Goodbye.”

Oh. my. gosh. It was all I could do to not fall apart right there. It was like having your toddler cling to your leg and beg you not to go. That always sucks, but you rationalize that they will have fun while you’re gone. And, of course, you’ll be seeing them again in 6-8 hours.

Only, this was my aging aunt who would NOT be having fun while I was gone and whom I don’t expect to ever see again.

It was so excruciatingly sad.

But, it was also beautiful. I will have no regrets.

Maria Montessori was right; the hands truly are an extension of the brain.