Happy Halloween! On this peculiar holiday that celebrates death, I thought I would share a very crazy, but 100% true story about my Grandma’s Eternal Halloween Departure.

Hey, I’m not the one who invented this holiday! So, if it sounds a little weird to celebrate this story, well… it is. But, death is a natural part of life and Grandma was ready to go. We talked about it and prayed together for several days before her passing. She made it clear that she was very much at peace with death.

So, on Halloween of 1991, Grandma passed away. And, she had just as much fun leaving this world, as did while she was in it!

Below are Facebook posts I made on the 20th anniversary of her passing. It wasn’t just a one-day story. Oh no…

Over 20 years ago, we lost Grandma Kruger. Of course, I miss her a lot. But, her death made for a great Halloween tale! 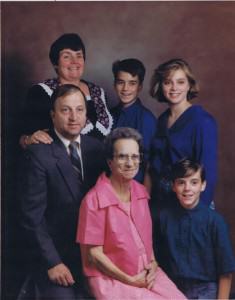 Our final family photo, taken just one month before Grandma passed away.

She had been sick, under Hospice care in our home. At 2:30 pm, she passed away.

One of her dying wishes was that my mom, a physician, sign her death certificate. That particular day, Mom was stuck at the office counseling a suicidal patient. She didn’t arrive home until 6:30 pm. (The patient went on to be fine, btw.)

So, we hung out with Dead Grandma in the living room for four hours. We decided it was far less creepy if you don’t leave the sheet over the head.

But, we had one problem… trick-or-treaters. They lined the street, sidewalk, and filled the driveway.

The hearse waited down the road for a lull in the activity. Dad finally cleared a few stragglers out of the driveway and the hearse backed into the garage. Soon, Grandma was wheeled out of the house.

Just as they were about to lift her gurney into the hearse, the pizza guy arrived! He saw the hearse, the dead body, and the name “Kruger” on the order. (Freddy Krueger of “Nightmare on Elm Street” was very popular at the time.) He thought it was all a joke; nearly fainted when I gave him money and told him it was for real.

As Grandma was finally loaded into the hearse, we all stood in the garage and laughed out loud! I remember thinking that moment should feel very sad. Instead, it was hilarious! What a great gift Grandma gave us… to pull this stunt on her final visit and give us a life-long tale.

Grandma had just as much fun leaving this world as she did while she was in it! Miss ya, Grandma. Can’t believe it’s been 20 years…

We flew Grandma back to her hometown of Eau Claire, WI. She h-a-t-e-d flying. But, she was dead. So, we didn’t think this would be a problem. And, obviously, we didn’t think she’d make a very good road-trip companion.

This is a picture of Grandma, laughing at all of the trouble she was causing. And, it was far from over…

The rest of us, (my parents, two brothers, and I) piled into our van for the 12-hour drive. However, a HUGE snowstorm -27 inches- hit Wisconsin as we drove in. It turned a 12-hour drive into 18 long and tedious hours on the freeway.

A sane family would have found a hotel to get off the road. But Grandma’s wake was in less than 24 hours. It had been published in the newspaper; we had to get there in time.

We FINALLY made it to Eau Claire. Drove directly to the funeral home to make final arrangements. The funeral director shook our hands to greet us.

“Well, folks… it looks like Grandma will be late for her own funeral!” The snow was so deep, the hearse couldn’t make the 90-mile drive to get her from the Minneapolis airport.

We all agreed Grandma was so upset over having to fly, she was putting up a fight! But, to our surprise, a total stranger kindly drove “up to the cities” with his four-wheel drive truck to get her. She *barely* arrived in time!

The funeral was over. Grandma’s apartment was packed and vacated. It had been a long and exhausting week! At last, we were ready to return home to Detroit.

We said goodbye to Grandma’s apartment. All of her worldly goods had been packed into our van and a trailer we were towing behind.

90 minutes later, we tooled down the expressway. Dad was driving. I was in the front passenger seat. The weather was clear.

For the first time in months, everything was calm. Dad listened to his “oldies.” I stared out the window. We passed under a viaduct as the freeway veered slightly to the left.

Suddenly, I was face-to-face with a beautiful, 200 lb, 10-point buck! A split-second later, he was dead. I looked him right in the eye just before we killed him.

Dad had no warning at all. He been driving the full speed limit at 70 mph. The viaduct completely blocked his view. We were lucky to be in a full-size van; a smaller car would have meant the end for Dad and me.

Miraculously, Dad kept the van under control and pulled over safely. I blacked out for a moment. Apparently, I screamed for quite a while. The next thing I remember was Dad laying his hand on my shoulder, assuring me that we were okay. Somehow, I managed to pull a pillow to my face (that had been under my feet) and put my grandma’s hat on my head.

…the things you do when you think you’re gonna die!

Dad was stressed out! He had just lost his mother, spent a full week cleaning out all of her worldly possessions, and inherited a lot of her bills. He sure as heck didn’t have the patience for this. He stood outside assessing the damage and talking with police. Meanwhile, my mom, brothers, and I waited inside the van, coming to terms with what just happened.

Dad opened the door to grab some paperwork and heard us singing. “Grandma’s kids ran over a reindeer… driving home from Grandma’s fun-er-al.” (To the tune of “Grandma Got Run Over by a Reindeer.”) Dad dropped his head on the seat and laughed!

…the things you do when you’re glad you *didn’t* just die!

The good news is that a very thin family in a very rickety car pulled up behind us; they asked if they could have the deer. They were very grateful. We all had the feeling they needed a bit of a break. It was comforting to know they would get many meals out of his meat.

That kinda made me feel better about the whole “lookin’-him-in-the-eye-before-killin’-him” thing.

But, our van was down for the count and in need of serious repair. It took two days for the closest auto repair shop to take delivery on the right radiator. So, we rented a car and drove around the back roads of Tomah, WI.

Much to our chagrin, our father is a restless wanderer. Those were two of the most mind-numbing days of our lives! One afternoon, we had driven so far out on the back roads, we hadn’t seen civilization for a loooong time.

We were tired. We were cranky. And, we were hungry! Finally, we found an eating establishment. Well, actually, it was a bar. Nonetheless, it meant lunch! My parents laughed as they thought about what they would tell our school principal, Sr. Elena, when we returned home. “Sorry the kids missed school. They were in a bar and shooting pool.”

My first “car” and final gift from Grandma…moments after the accident. Isn’t she a beaut? Ha ha ha…

The van was “totaled” by the insurance company. But, it had to be fixed to haul the five of us –and the trailer– home.

Now I had wheels! Big, bad, 4-speed, stick-shift wheels! Most girls don’t grow up dreaming of an Econoline Van for their Sweet 16. But, wheels are wheels and I had suddenly inherited freedom.

There was nothing I wanted more in life than the freedom to drive when and where I wanted! Getting my drivers’ license and my own wheels still remain the most exciting transition in my life.

Grandma loved adventures and loved to have fun. So, as unconventional as my new wheels were, it seemed completely appropriate that they became my final gift from Grandma.

Happy Halloween to you and yours!