Teaching a Skill: The Importance of Practice, Monitoring, and Feedback

In the waning minutes of the Michigan State Quarter-Finals soccer match, down by one goal, my team needed to score quickly… or our season would come to an abrupt end. 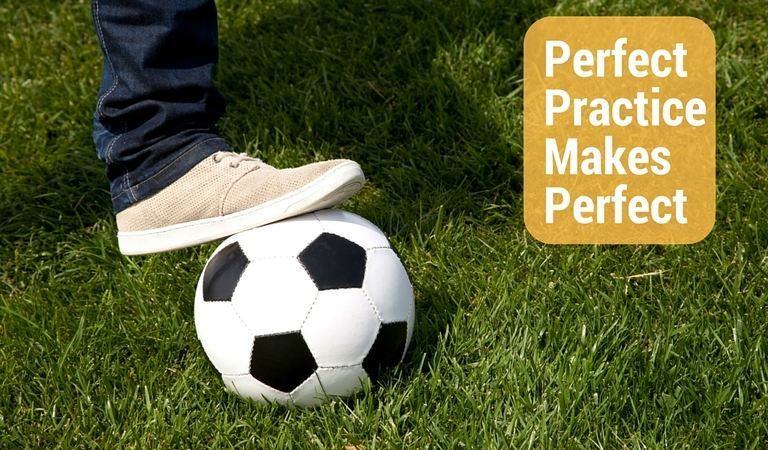 Desperation was in the air.  Every second that ticked off the clock was one second closer to our demise.

It was my senior year and I was coming to terms with the end of my soccer career.  All of a sudden, an opportunity arose with a corner kick.

All 11 players on the field turned to our bench to get the play call from our coach. He screamed out “Five!” with his scratchy, overly-strained voice.

“Five,” was a specific play where each player had defined routes to run. Some routes were decoys, but one was THE important route…

To score a goal would require flawless execution.  One player running the perfectly timed route.  Other players running convincing decoy routes.  One kick placing the ball in the perfect location at the precise time.

We tied the game with 2:04 left on the clock, but went on to win in overtime. However, the real story is not what happened in the game, rather what happened three months prior.

It was hot day in August when we first learned the corner kick play known as “five.”  Coach taught each player their designated route and roll, and we practiced it a couple of times.

I thought to myself, “easy enough, I got this.”  But, coach had us practice it again.

We would go on to practice this one play (along with many others), over-and-over throughout the entire season.  Frankly, it seemed ridiculous and unnecessary.

What I couldn’t see at the time was how our repeated practice lead to routine. And that routine resulted in flawless execution when we needed it most.

“Perfect practice makes perfect,” is what our coach would say.

With the game on the line, would we have achieved the same result if our coach had just taught us the play in August and not forced us to practice it over-and-over throughout the season?

How Do You Master a Skill?

Mastering study skills is the same as mastering any other skill.  It needs to be practiced to the point of routine.

That’s why teaching study skills is very different than teaching other subject content like math, science, and social studies.  You’re not teaching content in which a student must demonstrate knowledge.

You’re teaching a skill that must be repeated with near flawless execution over and over again.  For instance, when you teach a student how to use a planner or become organized, there’s more involved than teaching the “how to” and then giving a quiz for understanding.  If you want these to become life-long skills that produce meaningful results, it must become a routine for the student.

How Do You Teach Routine?

It’s really no different than my soccer coach teaching us the play, having us practice the play, receiving feedback about our practice, then practicing it again until our execution was perfect.

So, if you’re teaching students how to use a planner, you’ll start with the “how to” explanation and demonstration.  But, you’re only half-way done.

The other half of the process is the coaching part.  This includes: the monitoring of the follow-thru/execution, providing feedback, and then monitoring again.

You need to continue monitoring until a student can execute the task with near-perfection 7-10 times.  At this point, they’ve reached routine.

Moving forward, you still want to continue to monitor, but with longer intervals.  In the beginning, you might monitor daily, but that will become weekly, and then eventually monthly, until no more monitoring is needed.

This is your opportunity to develop trusting relationships with your students and impart meaningful skills through coaching them.  So, let SOAR® deliver the instruction and you focus on the coaching.  To learn more about our self-directed Learning & Soft Skills App, click HERE.  (Parents looking for support at home, click HERE.)