My Alma Mater Threatens to Distribute “Modesty Ponchos” at Prom

A few weeks ago, my beloved alma mater of 12 years (and the school where I launched my teaching career and where I launched SOAR) made international headlines when a provocative story broke; the school announced plans to distribute “modesty ponchos” at prom if girls’ dresses do not align with the dress code. (News story here.) 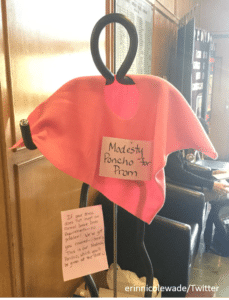 Issuing “modesty ponchos” is a bully move disguised as “discipline” only because it is issued by an institution of “authority.”

Turns out, the announcement was intended as a “tongue-in-cheek” reminder for students to follow the dress code; there was no intention to stock-pile shame shawls for the girls. So, a mountain was made out of a mole-hill.

In reality, the story exposed a much bigger issue about “discipline” and “consequences.” Regardless of the actual intent, the suggestion of Shame Shawls (er, uh, “modesty ponchos”) does nothing to solve the problem; it only makes the problem worse!

“What, Exactly, Are We Trying to Accomplish Here?”

“By default, every problem is a symptom, until we prove otherwise.” – Vasco Duarte

I posted the news article on my personal Facebook page with the comment, “…’Cause shaming girls will solve the problem. SMH at my alma mater.” Immediately, friends and former classmates swooped in with all sorts of comments. Many agreeing with me. A handful disagreeing. And a couple people bitterly angry.

Whoa! Like everything in life, we can’t boil this issue down to a few sound bites. There’s a LOT at play here. So, I sat down and punched out a more thoughtful response to the entire situation.

My response picked up following two specific comments: one suggesting I had not read the whole article and one asking bitterly, “What’s wrong with consequences?” So, this is what I said…

I did read the article. And I am 100% in support of “consequences.” In fact, the #1 reason I left my job as a classroom teacher was because “consequences for behavior” was not a value shared by administration at my school.

I also deeply believe that the way many girls choose to present themselves through their wardrobe is alarming; it’s a problem that absolutely should be addressed… for the sake of both young women and young men. I don’t believe anyone (on this thread) is arguing this point, at all.

Fundamentally, this comes down one question… “What is the main objective we are trying to achieve?”

I would like to assume the objective is the latter. But, nothing constructive can come from issuing a “modesty poncho.” It is effectively issuing a Cone of Shame. And, shame is, by far, the most damaging emotion!

A “modesty poncho” will only invoke a heck of a lot more retaliation. And, it sends a message of shaming that will be interpreted by many young women in a way that damages their already fragile body images, thereby only reinforcing the very thing it’s intended to discourage.

If we expect our teens to respect guidelines and rules, we must treat them with respect.Issuing “modesty ponchos” is a bully move disguised as “discipline” only because it is issued by an institution of “authority.”

Certainly, there is no guarantee that all young women will follow the rules. In that case, the very responsible and respectful way to handle that situation is to quietly pull the young lady aside and let her know that she is not able to enter the event due to a violation of the well-publicized guidelines. That is a very real consequence and is completely justifiable. It is a consequence that can be enforced 1) without any shame and 2) with respect to the PERSON, even though that person made an irresponsible/poor/dumb decision to violate the dress code.

Ideally, that situation would have been predicated with thoughtful conversations about how we present ourselves to the world, what we want to say versus what we might inadvertently be saying, etc… conversations that INSPIRE them to make the judgement for themselves, not because they were forced or shamed into following rules. But, if those conversations didn’t happen, or didn’t take hold with some students, then it is up to the adults to enforce a consequence that doesn’t do more damage, adding fuel to an active fire.

The single greatest reason our society, in general, has problems with “teenagers” is that we don’t treat them with respect. Yes, we have to “give respect to get it,” but that starts with the adults.

When we, as adults, start imposing rules by virtue of “control,” we have instantly established a platform of distrust with our teenagers; they know it and they respond to it in various forms of retaliation and aggression (some forms more passive than others), as they seek to establish some sense of the independence that God instilled within their souls.

This doesn’t mean that respecting them as intelligent human beings is going to result in them making the best decisions, 100% of the time. But, it does mean that when they make mistakes, they’ll be more receptive to the lessons learned… from consequences imposed without heavy doses of shame attached. #end of post#

One person politely responded. (She’s a current teacher at the school and was my teacher a lotta years ago, too.) She thanked me for a thoughtful response, but added that being rejected from the prom due to dress code violation gets spread around on social media, where the “shaming” continues.

I responded, “The school cannot control social media. That’s another consequence that students will have to face if they choose to violate the dress code. The school’s responsibility is to help prevent the situation through respectful instruction and dialogue, then enforce the dress code in a firm, but respectful manner.”

This story hit one of my most visceral nerves… how in the world can we expect our teenagers to be respectful, non-rebellious young adults, if we “solve” problems with coercion? We don’t like our bosses, or government, or in-laws using coercion to control us. How is it any different for our young adults?

I don’t know how the “modesty poncho” story impacted the evening for my soon-to-be fellow alums. But, I do hope all of this fuss prompts more constructive insights than destructive retaliation.