Educators: “We Are All from Detroit”

I was born and raised in Detroit. I’ve long been used to the negative impressions about my hometown when I travel. But last summer, the reaction went visceral. 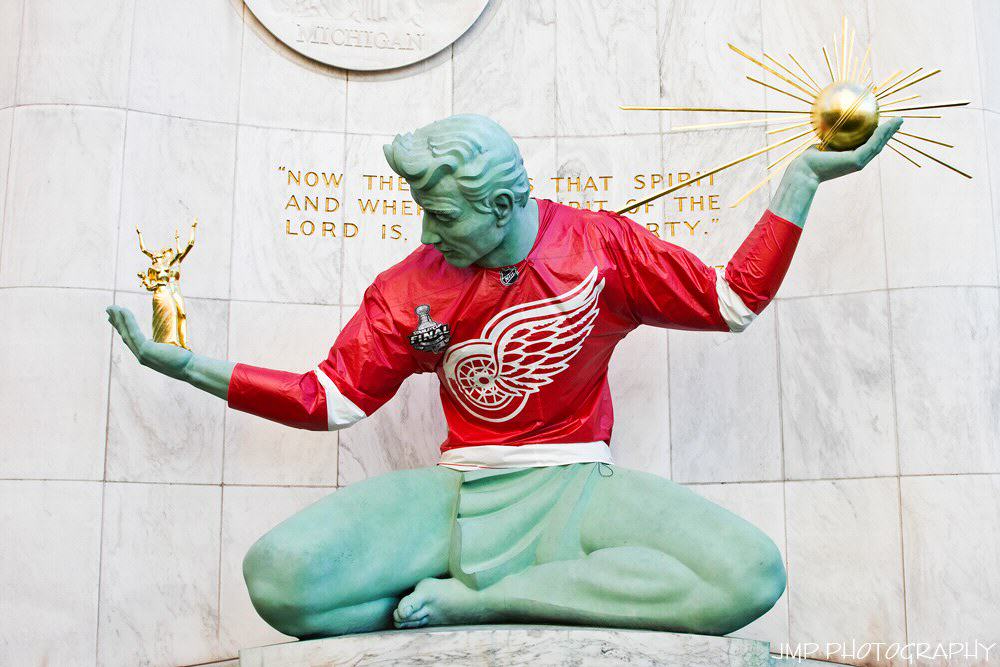 The Spirit of Detroit is our symbol of strength. (Photo courtesy of JMP Photography)

Two weeks after Detroit filed for bankruptcy, I was at a conference on the East Coast. Naturally, I was asked the standard opening question, “Where are you from?” My answer instantly caused a reaction of distrust and suspicion.

People looked me up and down with disdain, as if I had a disease. They stepped back and hesitated. In their eyes, I was responsible for Detroit’s troubles.

Give me a break, people! The corruption of the city was around before I was even born!

At the end of that first day, I went back to my hotel feeling dejected. “From now on,” I thought, “I’m going to say I’m from Southeast Michi— ,” then immediately caught myself. “No DAMMIT, I’m from Detroit!”

The next day, I had a new answer. “I’m from the good side of Detroit.” No more head-to-toe looks. Instead, people stared, dazed and confused. They couldn’t compute such a thing.

Then, I added … “It’s an attitude, not a geographic location.”

That simple (but 100% true) statement changed everything. Suddenly, I was having lovely conversations about my beloved hometown. About the spirit and grit of the people who live there. About our insatiable love of sports and our infamous sportsmanship as fans. About our love of cars.

The Detroit metro area has three million people; over one million of us attend the Dream Cruise every year to cheer on the classic cars cruising down Woodward Avenue!

When our team wins championships, one out of three of us floods downtown for the celebratory parade.

The same number of people come to watch the Freedom Festival Fireworks, shared with our friends in “South Detroit” (also known as Windsor, Ontario, Canada).

And remember when Detroit hosted the Superbowl in 2006? Roger Penske, of course, was a phenomenal leader, but he had an army of help. Detroit help. And Detroit opened her arms wide to welcome the country!

Two weeks after my conference out east, Kid Rock concert tickets fell in my lap. I was jazzed! Kid Rock is a major advocate for the city. So much so that he sold out eight shows last August. Eight! And, I mean, really sold out. Tickets weren’t even available on StubHub!

Nobody sells out eight shows! How did he do that?!  I was intrigued. So my friend and I headed out to show #7. That venue was filled to capacity!

The countdown began. Thousands of people gave rapt attention as they counted down: Fifteen. Fourteen. Thirteen. The anticipation grew with each passing second! Three. Two. One. Lights out.

Now, THIS is how Kid Rock sells out eight shows…

A Journey song began to play; and the crowd sang along: “Just a small town girl, living in a lonely world.   She took a midnight train going anywhere.  Just a city boy, born and raised in SOUTH DETROIT!”

Lights shined on the crowd. The city of Detroit was on fire!

Lights went out again. An eagle appeared on the screen, with an image of an American flag. Kid Rock’s voice comes over the microphone: (Click here to see the video)

“Dear God, thank you once again for bringing us all together. Thank you for your traveling mercies, for watching over and protecting us as we move from town to town. Thank you for the strength, the strength to motivate and move people. The strength to uplift the human spirit, the power to break down walls, and the glory of bringing people together. Lord, with the power of music, you have blessed us all. And we also ask that you be in our minds, bodies, souls, voices, and instruments, as we set out to entertain the many who have come tonight. And even though this great country, and many of the people here, have been through hard times, and known many disappointments, please guide us so that we go out on this stage and do everything but disappoint. And let us not forget, this is not just another concert in another town. This is DETROIT, MICHIGAN!”

One more brief moment the lights went out and then Kid Rock sang “You Never Met a M-F Quite Like Me”. From meaningful prayer to raw expletives, like 0-60 mph.

Ladies and gentlemen, this is Detroit. She’s been beaten and bruised, but she doesn’t give up. She keeps the faith. She’s not afraid to have fun. She’s a phoenix, and she’s rising from the ashes.

There’s an unwavering grit from her people who are determined to see her shine again. Sure, Detroit’s not perfect. Let’s be real: Detroit has suffered serious corruption and crime. The auto industry suffered a couple of throbbing black eyes. The football team doesn’t seem to pursue excellence.

But Kid Rock excavated her spirit, and put her on full display!

We All Live in Detroit

If you are in the school system, you know what it’s like to be from Detroit. You could be from New Jersey or California, or any flyover state in between. You know.

You have been stuck in a broken, outdated, bureaucratic system. Yet, you are passionate. You are compassionate. You fight hard. Every day. The struggle is real.

The System is just like the city of Detroit. Every new mandate, new restriction, new pressure, feels just as isolating and depressing as having someone look directly in your eye with suspicion and distrust, step back and look you up and down as if you have a disease. As if you caused all this chaos.

But you know there’s a “good” side of the system. It lives in your heart. It fuels your soul. You use it to nurture as many young souls as you can. And it keeps fighting.

Just like the city of Detroit, you suffer through the black eyes and bruises, and you keep fighting. You are the “good” side of the system. It’s an attitude… and it fuels the soul of our students.

To see how SOAR® is improving The System, click here.