I would like to send a special call-out to my cousins! I am the youngest of 32 “first” cousins; Minta, a cousin by marriage, says that we all have the same eyes. Apparently, the genetics do not stop there because many of us -and our children- have ADHD. There was a lot of buzz about ADHD (and my party lights) over Thanksgiving weekend. My mom encouraged them to join The ADHD Circuit®. Having my cousins subscribe will certainly keep me honest. They’ll likely keep me humble, too! 🙂

Last week, I described a lot of technical information about the electrical patterns in the brain and presented a model for understanding ADHD, which is a simple string of lights. Each bulb on the string represents a specific and isolated task or command within the brain. The wires connecting the lights represent the electrical signals that travel to the various parts of the brain, telling the brain to execute each task.

An ADHD brain does not have an adequate supply of brain chemicals to efficiently deliver these electrical connections. With ADHD, some neurons connect as you expect, others do not. There are no guarantees that the “lights will stay on,” nor are there any warnings when the circuit will be cut.

I first “experienced” this circuit on a conscious level one evening over the summer. I was just beginning to recognize ADHD in myself and consulted with a doctor for the first time. We had a lengthy discussion and she asked several questions. One of them was, “Do you ever find yourself making several attempts to complete ‘simple’ tasks?”

“Welllll,” I pondered… “Yeah. When my kids are thirsty, they have to ask me three times before I can get my act together and get them a drink. I always seem to get distracted. But, I always thought it was because of fatigue.”

The doctor gave a knowing smile as she quietly took notes. This was the very beginning of the diagnostic process, but I was slowly becoming more and more aware of the affects ADHD has on my life.

A couple hours later, I had returned home and was in the kitchen when my son, Mark, asked for a cup of juice. I said he would have to drink milk first, and then have juice. He agreed without a fuss.

The conversation with my doctor from earlier in the day immediately ran through my head. This time, I was determined to get his drink without any delays!

I looked at the fridge and thought, “I can do this!” All of the muscles in my head, neck, shoulders, and upper back tightened as I braced myself and turned towards the cupboard to get a cup. Within a couple of minutes, I was at the counter, milk and cup in hand, and had successfully poured the drink. As Mark walked away, I took a deep breath and thought, “I did it!”

At that moment, I felt the same sense of accomplishment as when I finished my first cross country race (3.1 miles) in high school. I was just as exhausted, too.

I had to remind myself that this was ONLY MILK!

A few minutes later, Mark came back with his empty cup. “Okay, Mom. I’m ready for my milk.”

At that moment, I was washing dishes and my hands were soaked. I asked Mark to set the cup on the counter next to me and promised to get him juice. I was determined to get this drink right away, too. So, I stared at that cup while I set the dish down and rinsed my hands. The whole time, I repeated to myself, “Don’t lose this! Don’t let it go! Don’t let go of this!”

Despite all of my good intentions and sheer will to NOT lose track of Mark’s cup, I did! There was absolutely no warning. The circuit was just cut! Equally frustrating is that my brain did not recognize that the signal was severed. It wasn’t until several minutes later that the sight of the cup triggered my memory.

This experience was eye-opening! You would think that getting my child something to drink would be a completely simple task. Let’s face it, I’ve done far more “complicated things” in my life. In fact, at age 7, Mark is fully capable of getting his own drink (he asks me simply because of height restrictions) and my 2.5 year-old is getting pretty close to pouring her own drinks, as well. Why then, is it so difficult for me?!

The answer to this question seems baffling…until you understand The ADHD Circuit®. When we think about getting a cup of milk, we perceive it to be ONE simple task. The truth is, there are many steps to the process. If we map it out on the ADHD Circuit®, it would look like this: 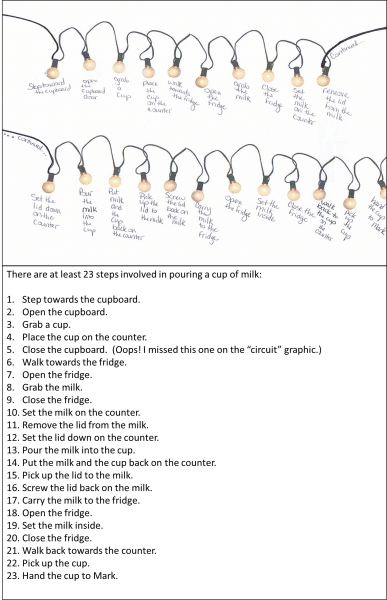 The brain quickly sequences these steps in order, then sends command signals to other parts of the brain to execute each one. The wires between each step (light bulb) represent a simplified model of neuron connections in the brain. In the process of getting a cup of milk, there are at least 23 different opportunities for the brain to miss a connection and drop a signal. It is no different than if you cut a wire between the lights; the lights INSTANTLY go out.

If the brain IS able to reestablish the signal, it will not be able to pick up exactly where it left off because the connection was lost so abruptly. With every disruption in a neuron connection, the brain has to go back to the beginning of the task and quickly cycle through every individual step to find the next starting point.

Do you remember the strands of Christmas lights where ALL of the lights would go out when ONE bulb burned out? To fix the problem, you had to go through and test each individual bulb to find the one that needed to be replaced. The process in your brain goes a bit faster, but it is the same concept. When your brain loses a connection, then cycles through a process to find the right place to reconnect, it takes time and energy! This constant “recycling” of the microsteps involved explains why people with ADHD often take more time to complete a task than someone without ADHD, and are much more exhausted doing it.

My experience that evening was a defining one! I learned several things about myself and ADHD:

1. There must be a connection between ADHD and my history of rheumatoid arthritis and lupus. I will never be able to prove this conclusively, but “tension” has been one of my most significant symptoms over the years. When I made the mental commitment to get that cup of milk, I felt all of my muscles in my upper body tense up as if I was bracing for a battle. When I begin a new task, I will often psyche myself up by thinking, “Okay, buckle down and get this done!” Immediately, my body will tense up as if am attempting to “pull myself together.”

I do not know of much research behind this topic, but it makes perfect sense that our bodies would have physical reactions to the mental stress created by ADHD. This would be an interesting topic for further research.

2. I discovered why I am so tired all of the time! I am chronically exhausted. I now understand why simple things like cooking, grocery shopping, and getting myself (let alone the kids) out of the house is totally exhausting!

3. Finally, I learned that no amount of willpower can fully overcome ADHD. I am sure my strong-willed personality has helped me “work around” ADHD over the years, but ADHD goes well beyond willpower! I was so utterly determined and “focused” to get Mark’s second drink; when I lost track of it in spite of my efforts, I realized exactly what it “feels” like to lose a neuron connection. The thing is, it didn’t actually feel like anything! There was no signal to tell me I lost the connection. No physical sensation. It simply vanished.

Snip! The power went out.

Article 1 – Introduction to the ADHD Circuit®
Article 2 – A Breakdown of the ADHD Circuit®
Article 3 – My Personal Journey Through The ADHD Circuit…for a Cup of Milk!
Article 4 – ADHD Is Not an Excuse!
Article 5 – Is it Creativity…or ADHD?
Article 6 – How to Avoid the “Tasmanian Devil Tailspin” of School Work
Article 7 – A Simple Learning Solution Hiding in Plain Sight
Article 8 – “EVERYTHING Is Wrong With My Kid!”
Article 9 – Improving Social Skills
Article 10 – When ADHD Children have ADHD Parents