The Vital Role of the First Follower

We have found there is a common trend with our teachers… they feel stuck. Stuck within the constraints of what the education world expects from them, while trying to balance teaching their students what they need to know to be successful in the real world.

Don’t you just want to start a movement for change? That seems like a lot of work though; especially because you are likely burnt out already. 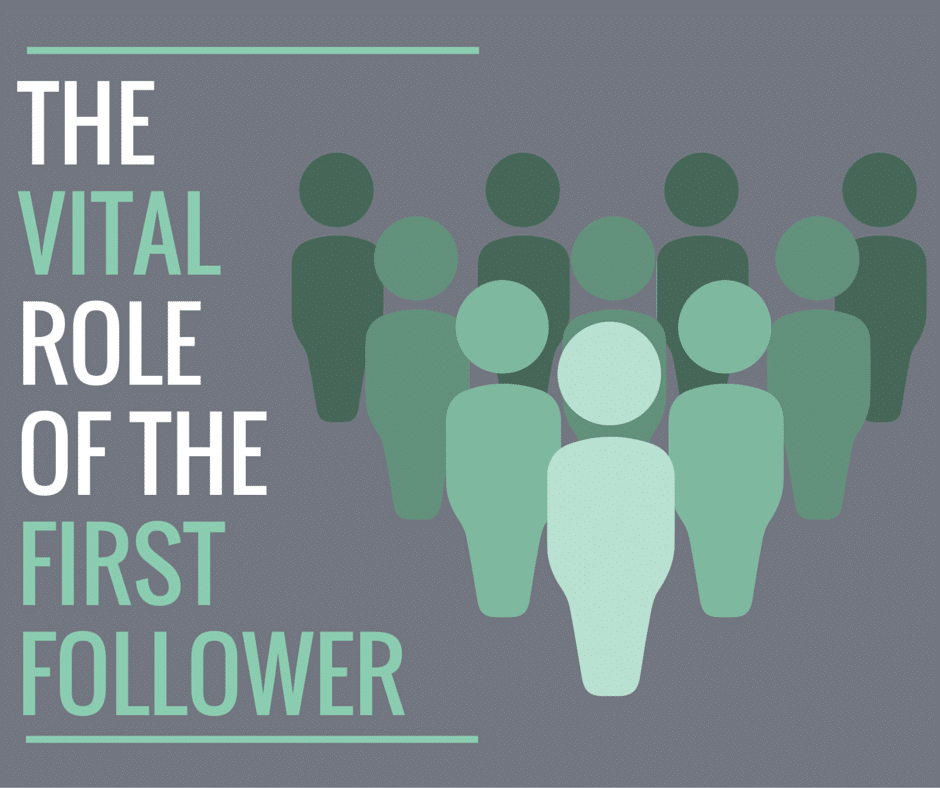 The most important factor in this movement is NOT the person who started it. It’s the first follower.

What if I told you that we at SOAR® already started a movement, and need you to be our first follower instead? Sound more intriguing? Let’s visit a quick “case study” to see what we are talking about (I promise it won’t be as boring as it sounds).

A video has been floating around the internet for a few years. You may have seen it and not even realized what you were watching. It’s a case study on how to start a movement. Or rather, how movements start and develop.

Entrepreneur, musician, and writer, Derek Sivers narrates the video. Sivers describes a “silly movement”, where a man in a field starts dancing, and in less than three minutes, he becomes the center of a dancing crowd.

After all, bystanders might think that one person dancing alone is a nut, but what do they think about a person who watches that first person… and then decides to do the same thing?

A funny thing happens after the first follower joins in. Now, neither one of them is dancing alone. Now, its two guys dancing, and it doesn’t look quite as crazy.

But another person had the guts to be the second follower.  Then, two more people had the guts to join once there were already three people dancing. When it was a dancing crowd, more and more people were comfortable joining in. Almost everyone was willing to be dancer number 8, 9, 10, and so on.

Sivers puts it pretty well: “Being a first follower is an underappreciated form of leadership. The first follower transforms a lone nut into a leader.” We all want to shape the world around us, and the way most people think about “leadership” makes us think that in order to do that you have to be the one in charge. But, we can often make a bigger difference by choosing to follow people who are already doing what we’d like to do.

Are You Ready to Be a First Follower?

We started a movement—here at SOAR®, we’re trying to spread the word about learning and soft skills, aka study skills. You already know that study skills are an incredibly powerful and incredibly underappreciated set of tools. You know that by teaching our students study skills, we can supercharge their ability to learn for the rest of their lives. While at the same time, making them college and career ready.

But in a lot of schools and communities, study skills are nothing more than a good idea—just one lone nut dancing while other people watch. People might be open to the idea of teaching a study skills curriculum, but they are waiting for that first follower to get things moving. Waiting to show that it’s something a “normal” person can do, not just a crazy idea.

If your school hasn’t started teaching study skills yet, you have an opportunity to change things for the better. You don’t have to take the helm and figure everything out for yourself; SOAR® is the framework you need to get started. You just need to start doing it! Set an example, and ask other followers to join you.

Teach students study skills. Tell other teachers about the benefits. Show them how you do it. If you introduce other teachers to SOAR®, soon they’ll be able to share it with other people themselves.

In fact, one person has to! Then it spreads. Then you have a movement that grows on its own—but you can know that you started it by being our first follower in your school.

SOAR® has started the soft skills/study skills movement with great results… The SOAR® curriculum has PROVEN to raise GPAs by 1 full point!  Here’s your chance to become a “first follower” and join the movement!

Click here to learn more about the SOAR® Curriculum and request a free Digital Review Copy of the curriculum.

To your students’ success,